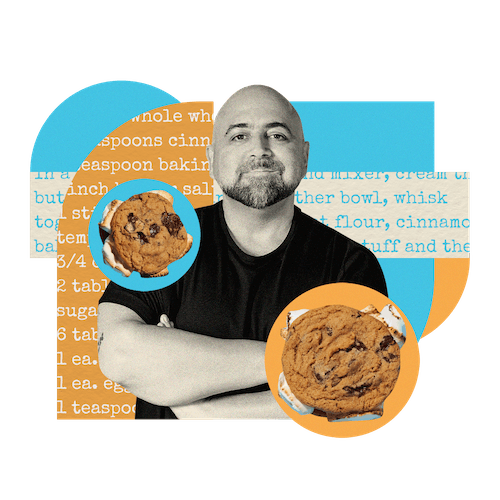 In his new cookbook, Super Good Cookies For Kids, Duff Goldman leads with a dedication. It reads “For Josephine. You and me are gonna bake so many cookies together.” It’s a sweet inscription from father to daughter. But we’d suggest one slight change: the “so” and “many” should be italicized or at least all-capped for emphasis, if only to capture some of Goldman’s crackling excitement. Goldman, the pastry chef and Food Network personality most famous for his wild confectionary creations on Ace of Cakes, is a generally enthusiastic type. But he’s so stoked to bake with Josephine, to spend flour-covered afternoons passing down his cake and pastry knowledge while singing songs and stealing spatula-tastes of cookie dough with her, that if it was possible to bottle that excitement for the masses, those Shark Tank investors would be falling over themselves for a piece of the profit.

“I feel like pre-kid my life was in black-and-white, and now it's in high-def,” Goldman says about his entry into fatherhood. “It’s amazing, and I can’t wait to do everything with her.”

But there’s just one small thing that worries him: “She doesn't like sweets as much as I do,” he says with a laugh. “She likes them, but I don't think she likes them as much as she likes cheese.”

Goldman isn’t too concerned about Josephine learning toward team savory. She’s only a year and a half. More important, she’s a great eater who adores new flavors and textures. She recently had her first pomegranate (“She is insane about them,” he says) and she’s pretty keen on carrots and hummus, too. Some of her other favorites: Spicy food, pickles, beef, chicken, and fish. “She's got a pretty good palate,” he says. “She likes a lot of different things”

What parent wouldn’t be happy with such an un-picky toddler? Goldman also says Josephine is “super adaptable.” “If we're out late, we're doing something, she stays up, she hangs out, she gets a little loopy, and she just seems like she's drunk, but she doesn't get cranky, she just starts getting weird,” he says. Unpicky, adaptable, and weird? Who cares about a sweet tooth.

And, let’s be honest, Goldman likely won’t have too much trouble passing down his knowledge and love of sugary creations. After all, this is the man who creates towering cakes that look like fast food and exquisite Harry Potter–themed designs. One cookie that he’s particularly excited to share with Josephine — and that he was kind enough to share for the Dad Special — are the S’more Cookies featured in Super Good Cookies For Kids.

Goldman, who recently launched the DIY decorating business Duff’s Cake Mix and can be seen hosting Holiday Baking Championship, is a little obsessed with cookies. He loves the variety of the medium, and sees them as an excellent portal into baking, which is why he wanted to write a fun, kid-centric cookbook dedicated to them.

“When you're baking cookies, you mix a dough, you make a shape, you stick it into the oven for 12 minutes, and, generally speaking, you have a cookie,” he says. “Your success rate for your first time is really high.”

The other thing that Goldman says makes cookies a great place to start for kids is that you can make a good batch your very first time — and then spend the rest of your life getting better at it.

Super Good Cookies For Kids is a fun, easy-to-follow, and, yes, enthusiastic cookbook. It features dozens of recipes for a wide variety of cookies, from classics and international favorites to fun new creations — as well as clear, concise instructions and advice.

As far as the S’more Cookies are concerned, Goldman says he’s long been obsessed with the taste and texture of that classic graham-cracker-chocolate-fire-roasted-marshmallow combination and wanted to create something that didn’t require a crackling fire. The result is a hard-to-resist cookie sandwich that features gooey marshmallows and chocolate squished between a pair of chocolate-coated graham-flour chocolate chip cookies.

So, does the Ace of Cakes have any advice for parents who want to bake with their kids? Whether you’re preparing a sheet pan of S’more Cookies or teaching the basics of cake creation, Goldman’s go-to advice has nothing to do with weight measurements or creaming butter. Rather, he says the most important thing parents can do in the kitchen is relax and show enthusiasm for the task at hand.

“Whether you're cooking or baking with your kids, just make sure it's super fun because you want them to do it,” he says. “The memories of baking really stick out from my childhood. The times that my mom cooked with us. The times that my grandma cooked with us. My great grandma. Those things are still really vivid, much more so than a lot of the other memories that I have. So make it enjoyable. I can’t wait for Josephine to join me in the kitchen so I can make those memories with her.” 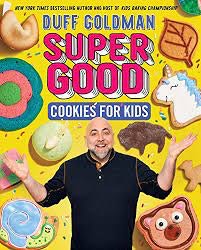 1. In a stand mixer or with a hand mixer, cream the butter and the sugar. In another bowl, whisk together the flour, whole wheat flour, cinnamon, baking soda, and salt. Add the egg stuff and the vanilla to the butter and beat until combined, then add the dry stuff and beat some more. Stir in by hand half of the chocolate chips. Cover the dough and chill in the fridge for at least an hour.

2. Pre-heat the oven to 375 degrees. Line four sheet pans with parchment paper. Scoop cookies out with a medium cookie scoop, putting six cookies on each sheet pan. Bake 10-12 minutes or until the cookies start to turn golden brown. Remove and let the cookies cool on a wire rack.

3. Flip half of the cookies over. Melt the remaining chocolate and spread a thin layer on the underside of the flipped cookies.

4. Light a candle and gently toast the marshmallows on sticks. When they’re good and gooey, put them on the not-chocolated cookie and then squish the two halves together to make