Well, this will likely be my last post before Christmas, so I figured I'd share some of the holiday foods I've been eating. Hanukkah started on Sunday, and though I am not Jewish, I love every holiday. And I love latkes. So I typically make them every year. This time, I made Isa's Sweet Potato Latkes from The Superfun Times Vegan Holiday Cookbook (she includes several latke recipes there). These had scallions and nutmeg, and they were perfect with Tofutti sour cream. On the side, I had some Israeli Couscous Salad (made from this recipe) and Roots Chipotle Hummus with Carrots. The latke recipe made quite a few latkes, so I've been eating them every day! 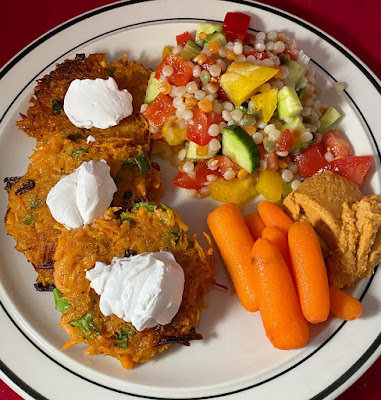 A couple weeks ago, the Crosstown Memphis CDC board (on which I serve as secretary) held its monthly board meeting, and we all agreed to bring cookies to share. I made the Vegan Gingerbread Cookies from Vegan Cookies Invade Your Cookie Jar (another Isa and Terry classic). These were excellent. And I had some left so I took them to the office, and they were a hit with my non-vegan co-workers. 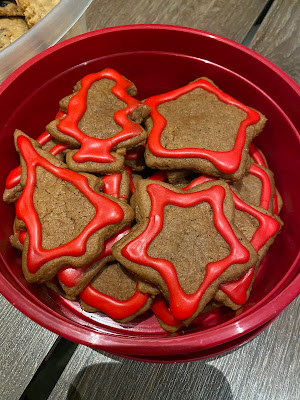 And finally, last night — Dec. 21 — was Yule/Winter Solstice, so I made two recipes from Llewelyn's Sabbats Almanac. The recipes in that book are very meat-heavy, but I enjoy veganizing them. For Yule, they suggested a berry-coated salmon, so I thawed a Good Catch Plant-Based Salmon Burger and shaped it into a salmon shape. And then I topped it with the recommended juniper berry and black pepper rub and a compote of blackberries and raspberries before baking it in the oven. It's not pretty, but it was quite tasty. I enjoyed this preparation much better than eating the salmon burgers on buns. 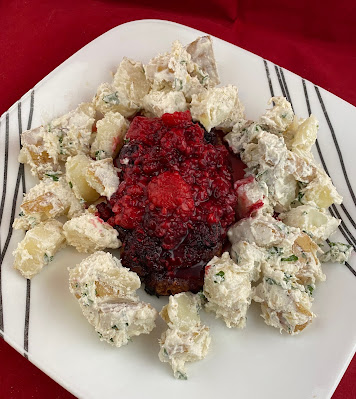 The book also included a recipe for Horseradish Potato Salad, which was easy to veganize with Tofutti sour cream and Bubbie's horseradish.

And the book also suggested Candy Cane Cocktails, which I made with a few substitutions. Mine had vodka, peppermint schnapps, grenadine, and oatmilk with a peppermint candy rim. Yum! 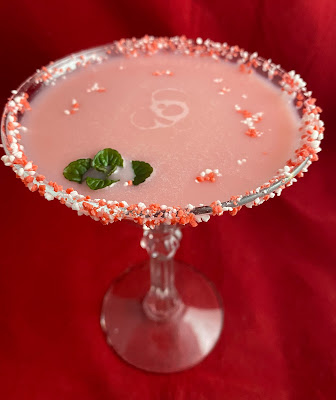