The gift-giving holidays are approaching faster than most people would like, so I thought I'd make a few recommendations for those of you who might be shopping for small appliances and other kitchen-y items. Everything listed below is something that I own and love and would buy again if I had to. I've had some of them for DECADES and they're still going strong, so I'm not in the market to buy replacements just yet. Actually, we Minxes aren't doing any gift exchanges this year, which is a relief to both the wallet and to the brain. After giving my brother a set of green pans and a toaster oven last year, an Instant Pot the year before, AND he has custody of my Ninja Foodi grill/air fryer thingy, so I'm sure he doesn't need anything else. And my brother-in-law is impossible to buy for so we usually resort to giving him an adult libation. Mr Minx and I tend to receive booze and books, which we both appreciate, but there's already too much of both in this house. (My goal for the rest of the year is to finish three partial bottles of spirits and get them into the recycle bin. There are four bottles of various rums that are excellent candidates for this project. And we're making a trip to The Book Thing this month to donate a couple boxes of books.)
Since I'm not giving anything this year, and I LOVE to give gifts, I'll just have to live vicariously through all of you. Leave a comment and let me know what you're planning to gift this year, especially if it's something from the list below. 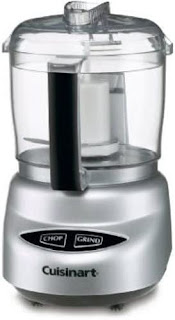 I got my first food processor in the 1980s, the classic bulky Cuisinart. It's great, but it's too big to keep on the counter, and too heavy to continually bring out of its storage cupboard every time I feel like making hummus. Enter the Mini-Prep, which doesn't take up much room and holds the perfect amount of hummus or muhammara for a two-person household. I use mine at least once a week, especially in the summer when the basil and mint are growing like crazy, or I have other green herby stuff that would make a good pesto.
This guy is sleeker than my squared off model from the aughts, but my little old guy still works, so why buy a new one? Not just yet, anyway. When I do, this is the one I want.
Cuisinart DLC-2ABC Mini-Prep Plus 24-Ounce Food-Processors, 3 Cup, Brushed Chrome and Nickel 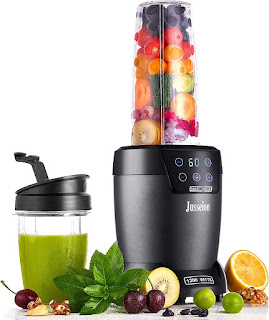 We got a classic Waring blender for a wedding shower gift 22 years ago, and it's my go-to for most things that need liquifying, gazpacho, for example. But then I got on a protein smoothie kick, making them for breakfast and occasionally lunch 5 days per week. Cleaning the Waring was annoying, as the blade is attached at the bottom of the jar and not removable, and the jar itself is heavy glass. So Mr Minx bought me a Jusseon smoothie maker, which comes with two sizes of plastic jar, and a screw-off blade. There are even caps to turn the jars into to-go cups, so there's no need to dirty a glass. 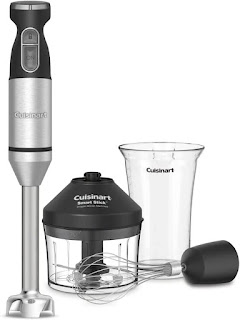 Decades ago, my Dad brought home a Cuisinart immersion blender, which my Mom dismissed as another useless kitchen gadget that would take up room. And in her kitchen, that was definitely the case. Somehow, she never required a blender or food processor of any kind. (I guess we ate a lot of chunky foods back then.) When I moved out of my parents' house, I took the immersion blender (along with the dining room table, some sofas, and more). I still have it (and the table), and I use it to smooth out soups and gravies regularly. It can also be used to make homemade mayonnaise. This newfangled model comes with a chopper/grinder and whisk attachments that make it much more versatile. Again, my old late-80s version works just fine, so I won't be getting a new one anytime soon. But you or someone you love might need one. Right now. 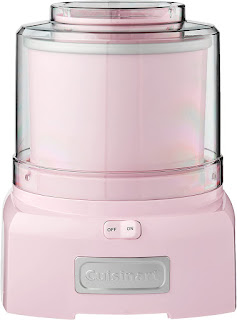 I've had a frozen-capsule-style ice cream maker since Donvier came out with their plastic crank handle jobbies in the 80s. Cranking ice cream is a PITA, so I abandoned that old one for a new-fangled electric model that essentially does the same thing. Before I make ice cream, I have to make sure there's room in the freezer for the capsule--which usually means I have to cook/reheat a bunch of stuff, as the capsule isn't small. After a couple days, once I'm sure that thing has frozen solid, I make my custard and commence to ice cream making (and eating).
If you're really into ice cream, you can buy the capsules separately and store them in the freezer for whenever the mood strikes and make two flavors at once! (Also, you need to not have an overfull freezer.) My Cuisinart ice cream maker is red, but I do like this baby pink one. (Other colors are available.)
Cuisinart Automatic Frozen Yogurt, Ice Cream & Sorbet Maker - Pink - ICE-21PKP1 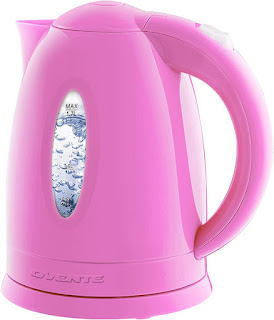 Another item I ordered because it was pink (though I was tempted by the lime green model!) is this Ovente electric kettle. We drink a lot of hot tea here at Casa Minx, all year 'round. Sometimes we just brew loose tea in the Mr Coffee, but other times we don't need that much tea. For instance, when I want a cup of chamomile before bed. Yes, I know I can put a cup of water in the microwave and magically have hot water a couple minutes later, but I've had a mug explode before. Dummy me didn't check if it was microwave safe, and it wasn't, and now I'm a bit hesitant to try again. So I just boil a pot of water in my cute electric kettle.

Ovente Electric Kettle 1.7 Liter Cordless Hot Water Boiler, 1100W with Automatic Shut-Off and Boil Dry Protection, Fast Boiling BPA-Free Portable Instant Heater for Making Tea, Coffee, Pink KP72P
* Any products in this post that are mentioned by name may have been provided to Minxeats by the manufacturer. However, all opinions belong to Minxeats. Amazon links earn me $! Please buy!