This is a chicken brine that will yield the most succulent, juiciest roast chicken you will EVER have in your life! Brining injects flavour and moisture as well as tenderising you will be blown awayhow juicy even the chicken breast is.

Once you learn how to brine chicken and taste the incredible results, you will never look back! Its simple and makes roasting a chicken stress free because you have extra insurance to ensure it stays juicy even if you overcook it a bit, plus injects flavour into the flesh!

Brining is the process whereby chicken (or other meat) is submerged in a salty liquid (brine) and left to marinate to inject flavour, tenderise the meat AND to inject moisture so the chicken stays juicier when roasted.

It injects flavour and seasoning right into the flesh of chicken in a way that no other method can, even by slathering liberally with herb and garlic butter under the skin which is my favourite non-brining way to roast chicken.

Its a technique widely used by chefs.In Sydney, there are a handful of restaurants famous for their roast chicken such as Glebe Point Diner, Boronia Kitchen and Restaurant Hubert and they are all brined!

This brine recipe is adapted from a recipe by Thomas Kellar, one of the greatest culinary masters of the world! 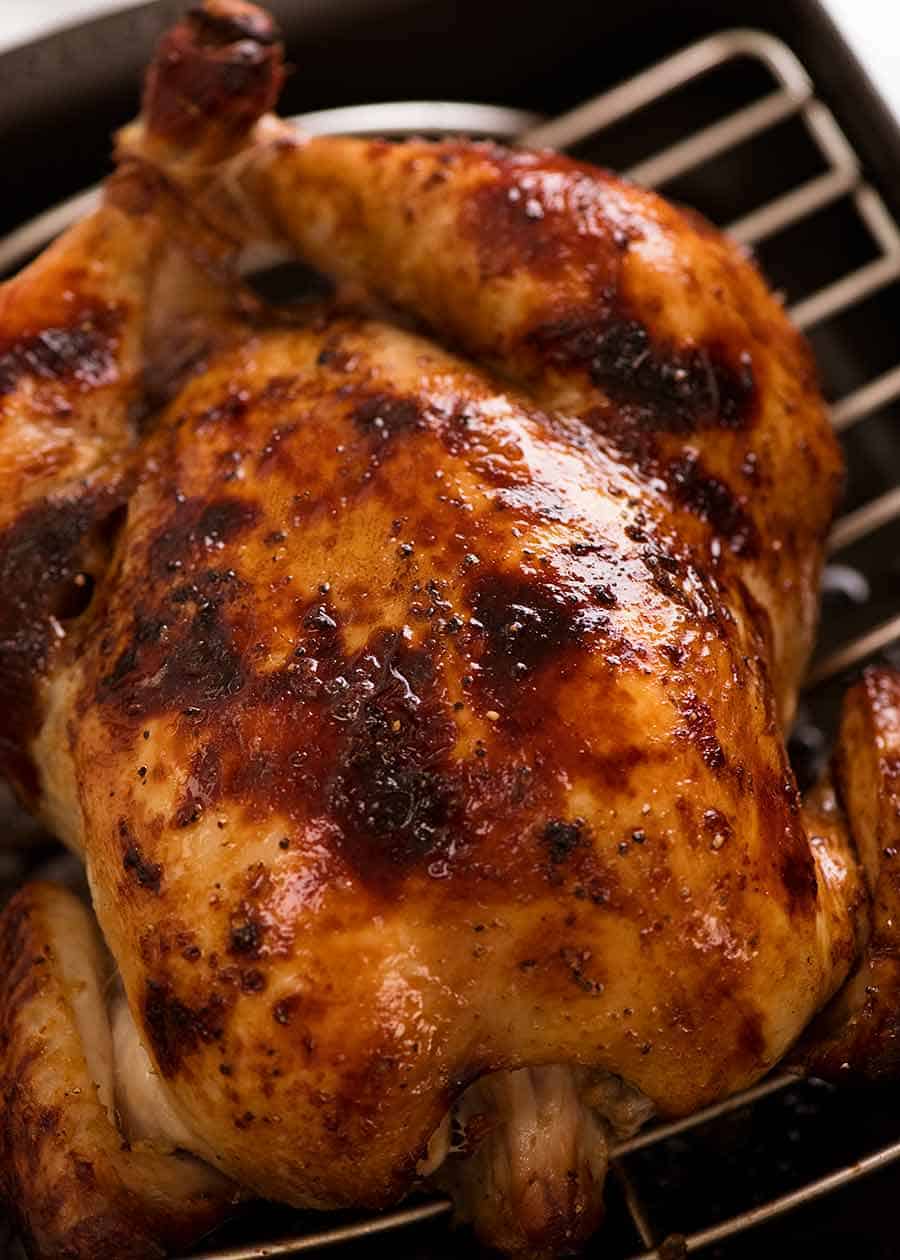 Heres an up close and personal of the breast of brined roast chicken LOOK HOW JUICY IT IS! Its hard to believe your eyes but its true, it IS possible to make chicken breast this succulent but only with a chicken brine! 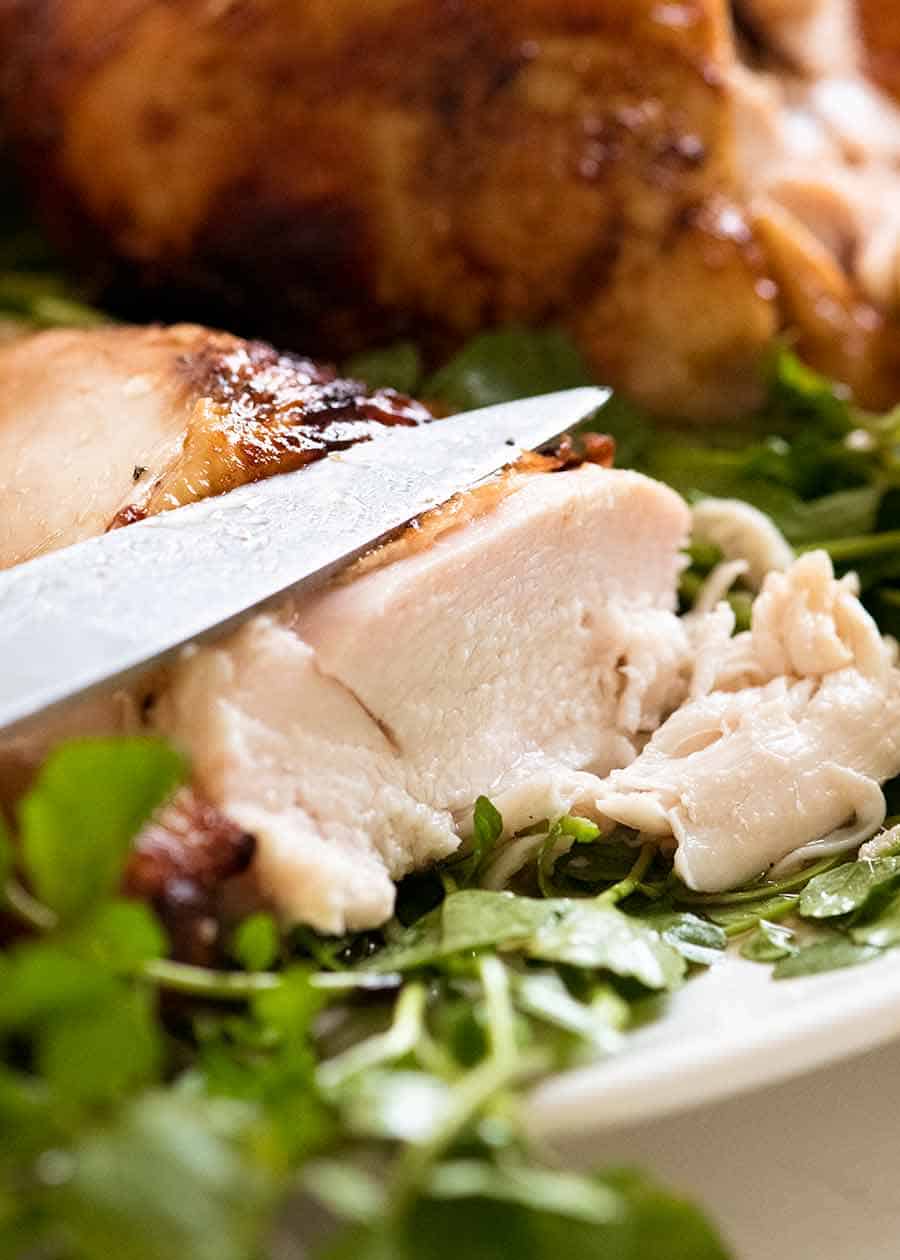 What you need for Chicken Brine

To make chicken brine, all you need is water and salt. Everything else is for flavour so its optional and customisable see below for substitutions for each. 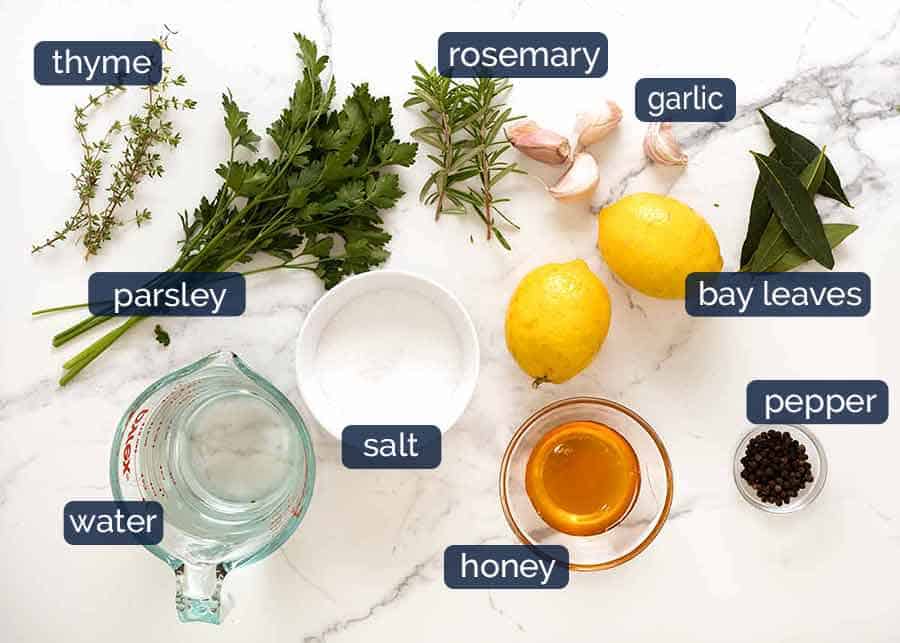 How to brine chicken

Its as easy as this: 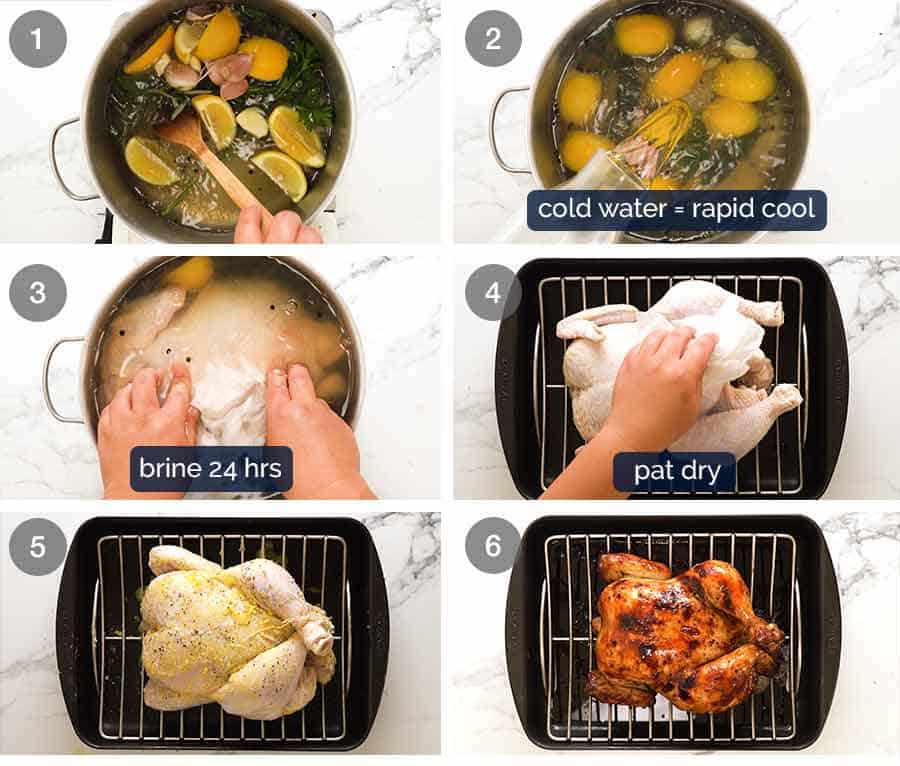 How long does it take to roast a 2 kg brinedchicken?

Difference between brining and marinating?

Brining is different to marinading in that there is a much higher liquid to meat ratio a whole chicken is completely submerged in the chicken brine. Marinades usually have far less liquid and the chicken is mostly coated in it, rather than submerged (examples: my favourite Everyday Chicken Marinade, Greek Marinade, Vietnamese Lemongrass Marinade). 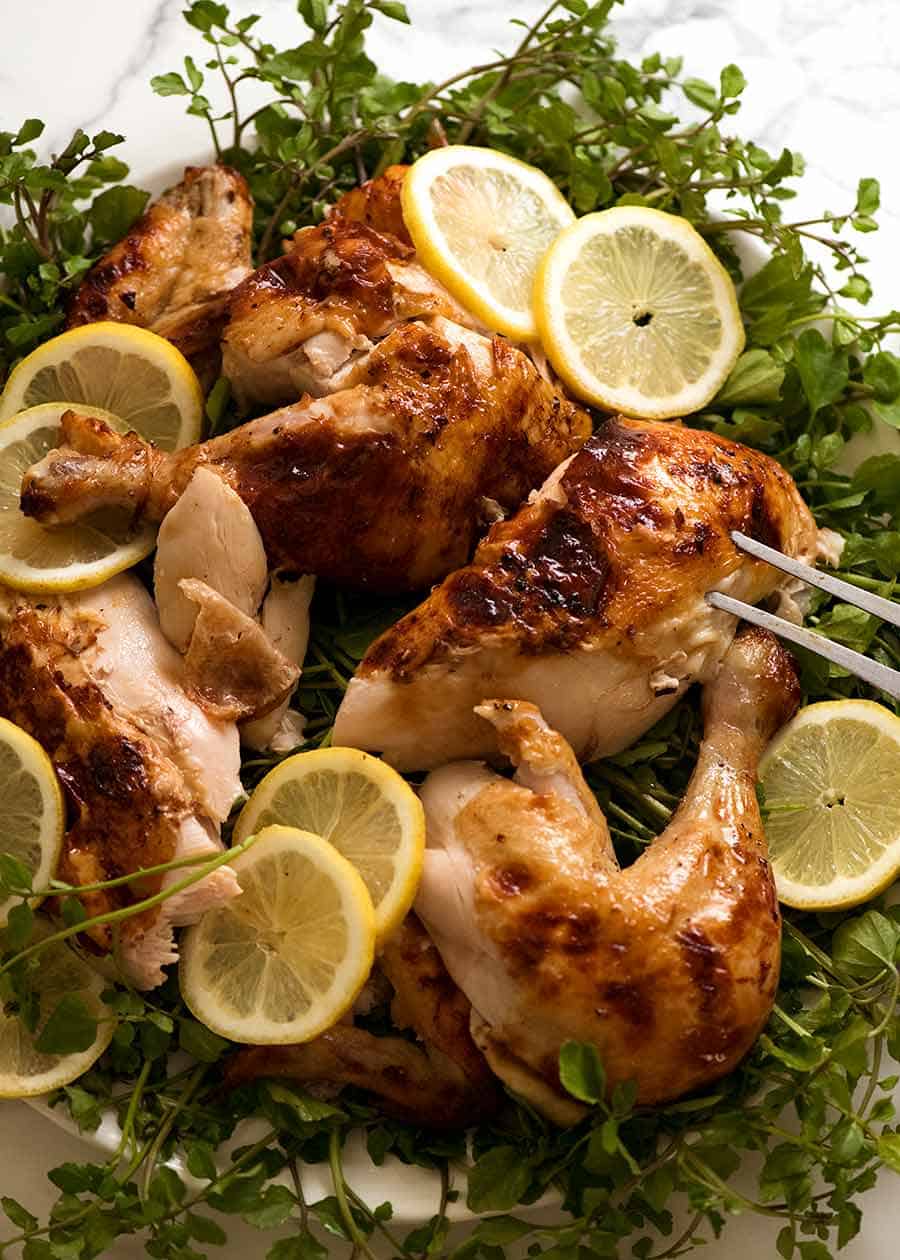 This chicken brine recipe is based on arecipe by Thomas Keller, one of the great masters of the culinary world. Known for high end iconic restaurants such as Per Se in New York and the French Laundry in the Napa Valley, as well as Bouchon Bakery in various locations across the US so you dont need to sell your soul for experience the magic that is Thomas Keller!

Watch how to make it 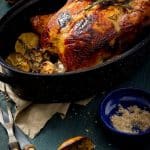 Brining is the secret to an incredibly moist, succulent, flavour infused roast chicken. This brine is based on a recipe by Thomas Keller, one of the great masters of the culinary world. This recipe includes a verjuice jus sauce, a lighter alternative to gravy.

To prepare the chicken for roasting:

2. Trussing a chicken is simply using twine to fasten the wings and legs to the body of the chicken so it cooks evenly.

3. Bring the chicken to room temperature before roasting to help it cook more evenly.

4. If you do not have a fan forced or gas oven, increase the oven temperature by 20C/70F.

6. Verjuice is like a vinegar but is not as tart as lemon juice and vinegar. It is made from the juice of unfermented grapes. Lemon could also be used, but as it is tarter, reduce the quantity to 1/8 cup and add sugar until the sharpness of the lemon mellows.

Originally published May 2014, updated November 2019 with fresh photos, video and most importantly, Life of Dozer added!

Dozer taking me for a walk in Melbournes Bourke Street Mall! Staying in an Air BNB for a week, cramming in meetings and generally pretending to be a Melbourne-ite for a week. First time Ive driven down its a long 10 hour drive but I REALLY wanted to bring Dozer down with me this time and Im so glad I did! Hes having a blast, More photos to follow hes causing a riot down here! 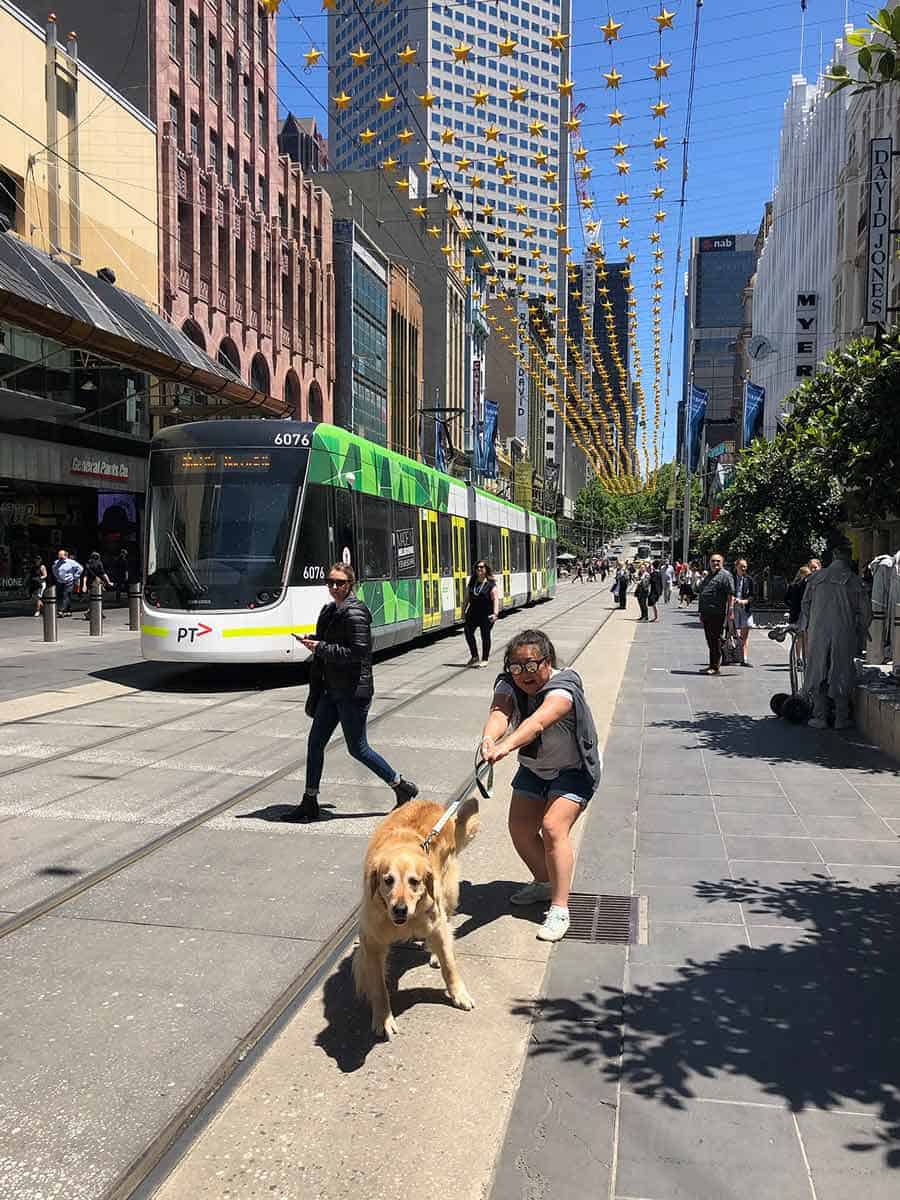 The post Chicken Brine for the juiciest roast chicken of your life! appeared first on RecipeTin Eats.