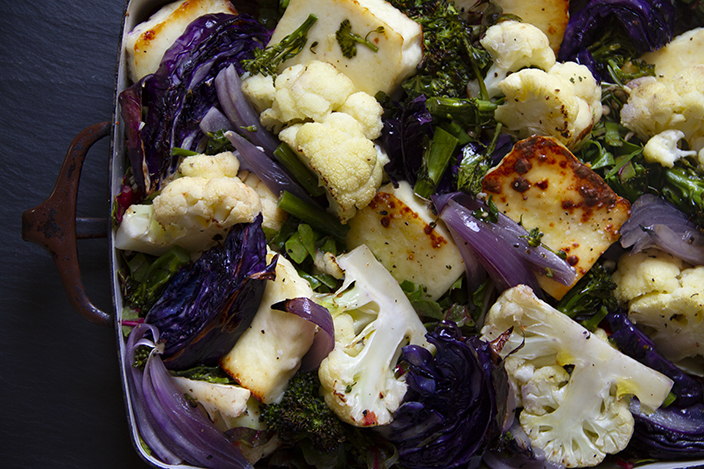 There was a time between eighth grade until I went to culinary school that I was a vegetarian. If ever there was a need to illustrate that food has always been the way in which I process the world even before I got cancer, it would be that one.

I became a vegetarian in the 8th grade, after begging my parents for about a year and finally convincing them through my work on a presentation for Civics class I put together on animal rights. I had gone to my first art camp the year before in Vermont, a whole state full of vegetarians as far as I was concerned, and my parents refused to accommodate my burgeoning shift. I remained determined and returned to camp the following year, where I was very demonstrative of my vegetarianism. Upon returning home and settling into the school year, my classmates and I were tasked with making a convincing presentation on any issue of cultural importance that was deemed by our teacher. And lo, my chance! I devoured all the books propaganda my brother insisted with an eyerollI could find in our tiny town and scoffed with indignance at the limited selection. I researched my point of view for about a month, if I recall correctly, which culminated in a tri-fold piece of cardboard with graphic images of brutality of animals ranging from animal testing to commercial farming. It was 1998 after all, so the fact that Alicia Silverstone was an activist for PETA was the feather in the cap of my presentation.

Perhaps, more than just my food choices reflecting my worldview, my vegetarianism perhaps was the first time in which my food choices were a reflection of virtue, or some kind of moral protection. It calls to mind some similarities to do with the diet I found after my diagnosis, as if what I ate could save me in some way. Maybe both dogmatic chapters of my life in food were both distractions from truths that were too difficult to process, both surrounding unfairness linked between innocence and death. In both, I was a hopeful activist, rebelling against what felt like a predetermined fate.

The difference between them, however, is that vegetarianism was a phase, a charming rite of passage for the budding liberal I was then. No one assumes I will outgrow my diet now or change it on a whim. The death I was processing through vegetarianism has somehow moved inside my body now after my cancer diagnosis. It is the unspoken force that surrounds so many of my choices, none of them charming or nave.

Another obvious but real truth about my stint as a vegetarian is it gave me a profound love of vegetables, of the bounty that grows from the ground, and how versatile and satisfying fruit and vegetables are as true nourishment for our bodies. This general respect for produce informed my career more than anything I can think of, the axis around which my perspective as a cook (and now my health) has revolved. This is precisely why I cant go on a strict elimination diet like Keto, because I refuse to think that an apple is somehow bad for you based on its carbohydrate count. The breakdown between humans and food cant be resolved by demonizing food, as is the habit of popular media and even some doctors Ive met. Its about nurturing, feeding all parts of you in a balanced dietincluding the vulnerable onesand being grateful for the life our food serves us one plate at a time. 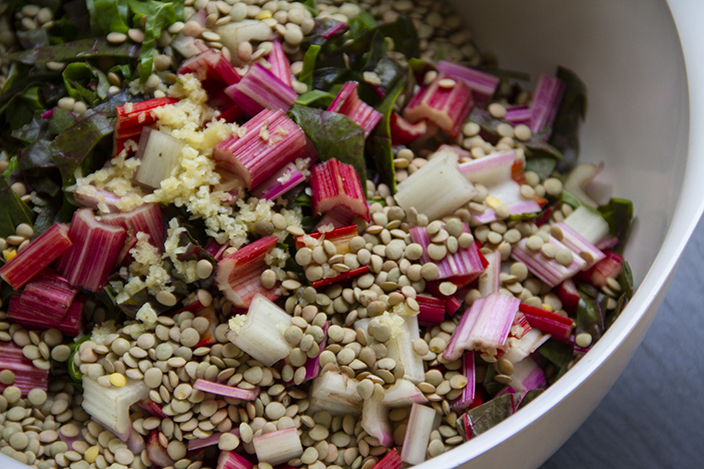 This one-pot casserole brings together the best of winters veggies in a hearty, satisfying meal. The best part is that its meant to be frozen, so you can pull it out for a nutritious weeknight dinner, even amidst the chaos of holiday entertaining.

1 / Heat broiler with rack in highest position. Drizzle and gently toss onion, broccolini, cauliflower, cabbage and haloumi with 2 tablespoons oil; season with salt and pepper. Broil, rotating pan and turning and tossing vegetables halfway through, until browned, 6 to 8 minutes.

2 / While vegetables broil, chop chard: cut stems into -inch pieces and shred leaves. (You should have 2 cups stems and 5 cups leaves; set aside half of leaves for another use.) Combine chard, tomatoes, garlic, rosemary, lentils and 2 cups water in a baking dish. Arrange broiled cheese and vegetables over top of greens. Drizzle casserole with remaining 2 tablespoons oil.

(Note: Casserole can be frozen at this point, once the broiled vegetables are cooled. Cover dish with foil, then plastic; label with the date and freeze up to 3 months.)

3 / Bake (from fresh or frozen) covered with foil in a preheated 350F oven until lentils are tender and casserole is bubbling, 1 1/2 hours. 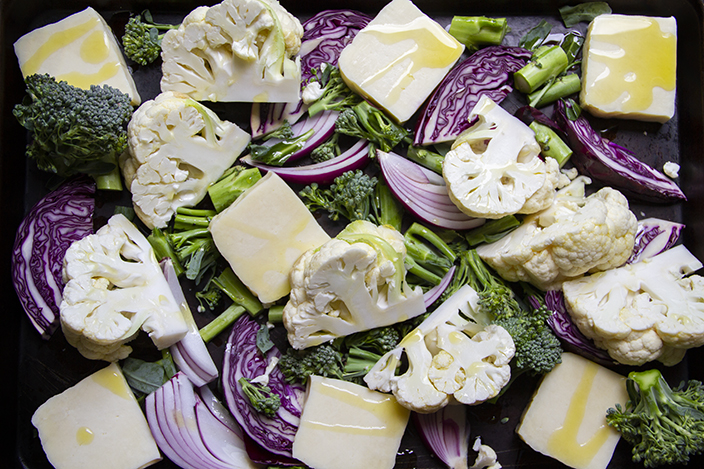