My dad always said that the best part of the Thanksgiving turkey was nibbling the crisp, fatty bits of skin that fell off his knife as he carved. The turkey sandwiches the next day were the second best part.

Sure, hed say, a plate of dark meat and gravy was all well and good. But those quiet minutes standing in front of the bird either carving it while it was still hot and glistening, or picking cold meat off the carcass to nestle between slices of bread were some of the moments he treasured most.

His sandwiches were straightforward affairs: bread (his homemade anadama), mayo, cranberry sauce, turkey. Maybe a little mustard or sliced onion, but never any stuffing, which he said diluted the pungency of the bird that hed slathered in garlic and rosemary before roasting.

Now that Im the Thanksgiving cook, I agree with him about the joys of crisp bits of turkey skin. But when it comes to the sandwiches, I go my own way, mixing it up year after year.

The only thing that remains constant in my turkey sandwiches other than the turkey is using some kind of pickle to perk things up. Turkey can often be gentle and appreciates that hit of salty acid.

So its no surprise that pickles feature prominently in these three sandwich recipes.

In the first, a take on a Cubano, dill pickles are mixed with spicy pickled pepperoncini before being layered with cheese, ham and turkey, then pressed and toasted in the oven. (A couple of sheet pans stand in for a sandwich press.)

In the last, red onions are quickly pickled with lemon juice and salt before being stuffed into pita halves with turkey, chickpeas, fresh tomato and cucumber, and topped with a garlicky tahini dressing.

But all these sandwiches are just suggestions. Because you dont really need a recipe for a turkey sandwich. Go with your gut, and use whatever combination of leftovers and condiments you love.

The good thing about having your own kitchen, my father was known to say, echoing Julia Child while dunking soft threads of turkey neck into the gravy pot, is that no one can see what youre doing.

1. Place a rack in the center of the oven and another rack directly below it. Place a rimmed baking sheet on each rack. Once the pans are inside, heat oven to 350 degrees.

2. In a small bowl, add the mayonnaise and stir in hot sauce or mustard to taste it should have a kick. Spread mayonnaise mixture inside the rolls, coating both the top and bottom halves. Layer rolls with turkey, ham, cheese, pepperoncini (if using) and pickle slices.

3. Using your hands, press the sandwiches down and make sure nothing slides out. (If it does, poke it back in.) Then, use a brush to butter the top and bottom halves of the rolls.

5. Carefully return to oven and bake until sandwiches are warm, toasted and golden brown and the cheese is melted, 8 to 13 minutes. (Youll have to lift off the second pan to check on the sandwiches.) Cut sandwiches in half and serve immediately.

1. In a large bowl, stir together onion, 1 tablespoon lemon juice, salt, cumin and sugar. Let sit for at least 10 minutes while you prepare the rest of the ingredients.

2. Meanwhile, in a small bowl, stir together tahini, remaining 1 tablespoon lemon juice, garlic, pinch of salt and 2 to 3 tablespoons warm water to thin the sauce. It should be thick but pourable. Taste, and add more salt and lemon juice, if needed.

3. Into the bowl with onions, stir in chickpeas, cucumbers, tomatoes and oil. Taste, and add more salt and lemon juice if needed.

4. In each pita half, layer turkey, then drizzle with tahini-lemon mixture. Add spoonfuls of chickpea salad, cilantro and mint. Drizzle liberally with more tahini sauce and zhug, if you like.

1. In a small pot, combine 1/4 cup vinegar, the sugar and the salt. Cover pot and heat just until sugar dissolves, 1 to 2 minutes.

2. Meanwhile, in a medium bowl, toss together cabbage, shallot, carrot and jalapeo. Pour hot vinegar mixture over vegetables and toss to combine. Cover and let sit, tossing occasionally, while you prepare the sandwiches.

3. Pour barbecue sauce into a medium bowl and taste it. If its too sweet, add a little more vinegar and hot sauce, if you like. Toss in turkey and stir until evenly coated.

4. To assemble the sandwiches, spread mayonnaise inside the buns, if you like, then fill the buns with slaw, pickles and turkey. Serve with more hot sauce on the side, if you like.

Leftovers are a reward for all the hard work that went into the holiday. So you deserve something delicious and satisfying with this turkey Cubano. If you have leftover wine, it will go great with the sandwich. Enjoy it. If you are opening something new, Id opt for a light and lively red. It could come from anywhere, including California, Beaujolais, the Canary Islands or Sicily. As long as its thirst quenching, a vin de soif, it will be satisfying. You prefer a white? Why not? The same idea holds, whether it comes from Vouvray or Oregon, western Spain or southern Italy. Riesling would be delicious, either dry or moderately sweet. Maybe you have had enough wine? Drink a beer, and relax with the feeling of a job well done. 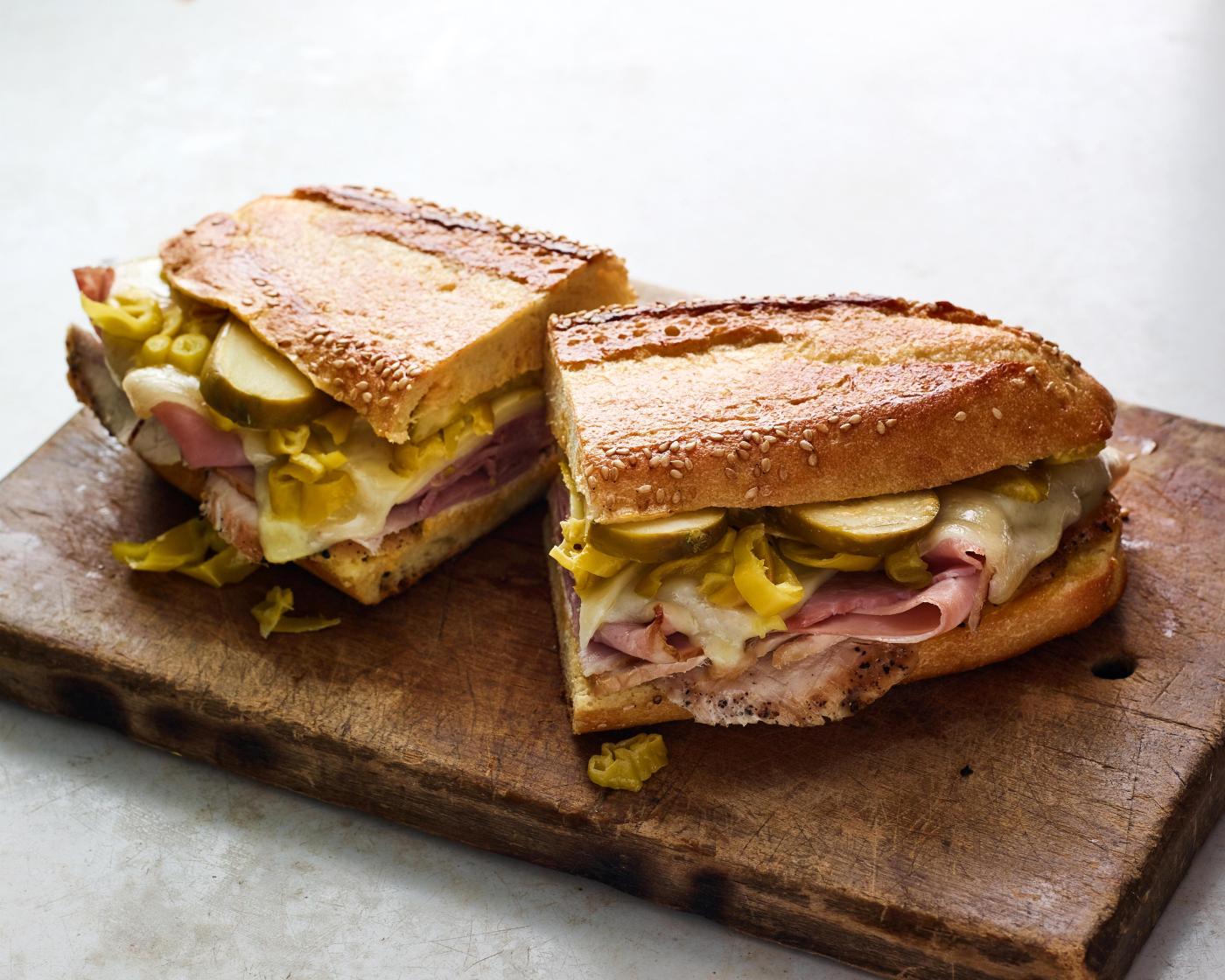